My Conversation with Sheriff Mack

Sheriff Mack is awesome. (If you don’t know who he is, click this: http://tinyurl.com/26dr4yg) My introduction to Sheriff Mack was courtesy of Hot Bald Guy. I was at Hot Bald Guy’s house a while back, sitting on the couch, probably waiting for him to get done primping (he’s worse than a woman sometimes, but it’s OK because it’s always better to have a clean man who takes care of himself instead of a “musky” macho man that thinks showers are for sissies and soap is for wusses). Anyway, he had Sheriff Mack’s book, The Proper Role of Law Enforcement

, sitting on the coffee table (which is actually some sort of steamer trunk looking thing). I picked it up and started reading – and I am pretty sure I finished it before Hot Bald Guy came down. I fell in love with Sheriff Mack.
Now, imagine my excitement at getting to meet Sheriff Mack! I drove all the way to Philly - well Big Daddy drove, but I navigated! – just to meet him (OK, maybe not just to meet him but he was definitely the highlight of the trip, much better than room 803, but that’s another story for another time). The big day finally comes, I am hung over and tired but still in all of my excited glory at meeting the Sheriff. During one of the speeches, I went out into the lobby area and BOOM! There is Sheriff Mack!!! All alone! Just me and him! I might actually get to have a decent conversation with him.
So here’s how it went:

Sheriff Mack: Hi there! (I think he tried to sell me a book and asked if I knew who he was)
Me: (DUH! Of course I know who you are!!) Yes, you’re Sheriff Mack, I read your book and you are AWESOME!
Sheriff Mack: Your hair is red. (No, just like that. Don’t imagine any sort of tone to this, none. Just a simple statement, like “The sky is blue”)
Me: Yes, yes it is.
Sheriff Mack: Haha, sorry, I am good at pointing out the obvious!
Me: (Said something profound and engaging, at which point we were going to begin a totally awesome conversation about relevant things – not about my hair, although my hair is very relevant.)

Then what happens? Andy Maul. Andy MOTHERFUCKING Maul!! You guys (I say this like I have more than one follower), look, you don’t even get it. Andy Maul is like my arch-nemesis. This dude lives in da ‘Burgh and used to basically stalk my Facebook and post nasty, douchebaggy comments on pretty much everything I posted. Believe me, he's much more brazen sitting behind that keyboard. In person, he appeared to be the type that would shit himself on the spot if you walked up and said "BOO!" Eventually, I got him to delete himself from my page, and I thought I was done with him.
NNNOOOOOOOO! In walks Andy Fucktard Maul  like a true douchebag (looking much like a reluctant yet excited little fat kid) with his ounce of silver to buy a Sheriff Mack book and totally fucks up my mackin’ on Sheriff Mack!


So thank you, Andy Maul... Thank you for ruining my life. You suck. 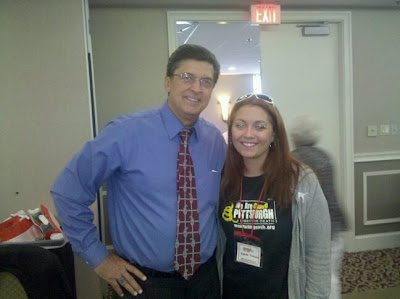 Posted by Trbobitch at 6:49 PM