On Being a VIB

Ok, let's get this out of the way first. You're thinking that VIB is some hysterically witty spin on VIP that I made up... Your first thought was probably Very Important Bitch. You're wrong. I'd never call myself a bitch. It would be VIT and if you don't know what that stands for, think about it, while I continue with my story.

VIB stands for Very Important Beauty Insider (which means it should probably be VIBI but that doesn't really sound right so I guess the Insider part is just implied for those of us in the know). It's a rewards program from Sephora. Sephora is a gigantic beauty product store. In case you didn't know, I have a slight obsession with makeup (not quite as bad as my obsession with bald heads, but close). Sephora is a veritable wonderland of over-priced goods for the vain and self-absorbed woman (or man).

If you happen to be an artist, imagine a store where every shelf is stocked with any and every kind of drawing, writing and painting implement imaginable. Now imagine that there are "testers" in front of every shelf, along with blank canvases everywhere that allow you to test the products before you buy them. Imagine the endless fun and creative enjoyment you could exercise and you'd probably leave happy even if you didn't buy anything. However, you know damn well, given this situation, that you would be completely unable to resist buying something. (This same scenario can be imagined by my male readers who like (I said like not are) power tools... Just imagine going into Home Depot and they have lumber samples set up for you to test out that power saw, hedges in the middle of the isles where you can test your super-deluxe chainsaw and in the back, your wife can try out her new washer with piles of dirty laundry provided by the store... Does anyone else think I am totally on to something here???)

So, getting back to me being a VIB... That means that I have spent an exorbitant amount of money on makeup in the past year and to thank me for handing over a double-digit percentage of my income, Sephora gives me a super cool status and some "bonuses" from time to time. Yesterday, one of the bonuses was an exclusive VIB party at the store. So my coworker (and cohort in makeup obsession) and I went for a girl's night. We started out at the bar, which means we had a pretty good buzz by the time we walked over to Sephora. We were first met with the sounds of some super fantastic 80's Madonna blaring from somewhere. Turns out, Sephora went all out and hired a DJ to stand in front of the store for this party. If that wasn't awesome enough, he was bald. This was going to be a good night...

We are standing outside, finishing our pre-game cigarettes (for those of you who know I am quitting, yes, I smoked last night, but I am back on the wagon and I haven't touched a cigarette since I got home. And mind your own business!!! Dammit!), when out walks another bald guy with a bottle of champagne. Just the image of a cute bald guy holding champagne is enough to double my heart rate. Even better, he was totally gay. I love gay guys, they hit on you shamelessly, their compliments are 100% sincere and you know that, if you hit on them back, they are not going to try to rape you later. So now I am surrounded by bald men, makeup and alcohol... Now that I think about it, I'm pretty sure I was not in Shadyside but, in fact, had a brief venture to Valhalla. I have seen heaven and know what it's like, praise jeebus!!

To make it even better, while bald gay guy was popping the bottle of champagne, he looked longingly at our cigarettes and told us he hated us and was totally jealous. Not to miss an opportunity, I offered him a drag of my cigarette, which he accepted with great (practically orgasmic) relish. Heather and I both contended that this was possibly the hottest thing EVER. *shiver*

Getting into the store was another adventure entirely, less like Valhalla and more like Hades. First order of business was to get some champagne. The food table was completely packed, but I managed to elbow my way in... Pretty impressive too, champagne, chocolates

, some weird meat substance that starts with a B which Heather was pretty excited about. I don't know if it was good food or good champagne, but it was free and, by that point, it hardly mattered as I had already eaten and the champagne was the only item of interest to me and because I had already had 3 beers, the quality of the champagne would have been lost on me anyway.

As it turns out, Heather is somewhat of a quasi-celebrity with the employees of this particular Sephora. It's no surprise, as she is the Queen of Makeup and All Things Chic and Awesome. So we walked around Sephora like the rulers of the world, rubbing eye shadow on the backs of our hands and schmoozing with the staff. After about 45 minutes of this, hands covered in various shades of shadow, eyeliner and lipstick, as well as the insane purple gloss

on my lips (which Heather somehow convinced me to actually buy), we get in the 3 mile line to pay (they were totally out of champagne and my buzz was wearing off, and I had to pee like a mofo - there are no bathrooms in Sephora, it turns out).

in the back. Because Heather is a quasi-celebrity, the woman immediately promises to check and dashes off. This palette has been for sale by Urban Decay for months, and without going into too much detail about why it is so awesome (because I'm sure you really don't give a rat's ass and only people who are complete freaks actually know that there is an eyeshadow palette selling for a 300% markup on the ebay black market) I'll just say that it is my strong suspicion that Urban Decay cranks out about 10 of these things a month to create all this hype purposely, they are probably running said black market and are more than likely convincing women to sell their souls to get their hands on the Naked Palette. Of course Heather has one, but she asked for me, because she is awesome.

While we're standing in line, barely resisting the urge to buy the stuff we are staring at and playing with while waiting, another woman in black appears and asks Heather if she had someone "looking for something" for her. It was a scene straight out of a high-end drug deal with the Greek mafia. Heather, in her fedora

and pin striped suit jacket, gives the look of someone in the know, someone you don't say no to, and says, "Yes, a Naked Palette" (which could have totally been code words for China White). Then, like a scene out of some big-time spy movie, the saleswoman speaks into her stealthy headset and lets Heather know that the woman has gone upstairs in search of her goods.

It's almost our turn to check out when the saleswoman returns with Naked Palette in hand. The squeals and longing jealous looks from the other ladies standing around me commence as I take into my hands the holy grail of makeup. There was much excited jumping up and down and hugging of the saleswoman on my part, because not only was I getting quite possibly the most awesome thing ever, I was getting it for 20% off!!!!!!

I assure Heather that I will not only buy her a vodka tonic, but that I will pony up for some Kettle One vodka because she is my hero. We pay for our hauls and as I am walking away from the counter, Heather holds up the free goodie bag that she got and says "where's yours?" When I turn around and demand not to be cheated out of free stuff, the cashier looks at me as if I were not entitled to a free goodie bag and was a total asshole for even asking (I'm sure she was just jealous of my hot, purple lips) and begrudgingly hands over the bag with nary a word of apology for her attempt at denying me my VIB right to free goods.

to Kettle One, the bartender graciously put very little tonic in our drinks. After we finished, we needed a "The gentleman will sit!" fix and, on the street corner, sang along (horribly) to the following, in front of all of Shadyside:

This is why it is awesome to be a VIB and why men should never want to come along on a girl's night out or even wonder about what goes on when girls have them. We're only cheating on you with gay men and spending all your money, it's cool. (Of course, Heather and I are badass breadwinners and spent our own money). 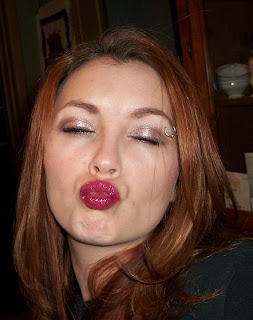 I look like I am in pain. I assure you I am not, I'm just a little tipsy.
Posted by Trbobitch at 6:35 PM