Dear People Who "Don't Care" About the Royal Wedding,

Evidently, you care more than the average person, like me, because up until a few days ago, I had only a vague notion about some "royal" (I mean, they're not even real monarchs anymore, are they? It's all just for ceremonial purposes and so the Brits can keep saying "God save the Queen" (from what exactly, no one knows... Poisoned sweetmeats, perhaps?)) wedding taking place somewhere in Europe between some royal dude and some chick who I am not sure is royalty (whatever the fuck that even means any more... Maybe she's a Duke or some shit). Now, however, my Facebook  feed is littered with crap about how much people "don't care" about the royal wedding and people who do are "stupid sheeples" or whatever. Seems like the people who "don't care" are talking about it more than anyone else.

Anyway, I get it. You really do care but you don't want people to know you're a secret celebrity stalker with a subscription to People magazine ("it's my wife's" ain't cuttin it, honey, because we all know you're a fat 44 year old loser sitting in your mom's basement). This is like the latest trend in being cool, totally pretend like you're not into whatever you keep talking about, so you look way cooler than the people who are all about it and also the people who really don't care because you can be all like, "yeah, I'm worldly, I know everything that's going on in the world, but I actually know what things are important and what things aren't. Like, you know how the Reptilian Freemason Illuminati headed by Dick Cheney and his demon cat have fabricated Obama's birth certificate and if you argue, your ass is going in a FEMA CAMP motherfucker!! The fact that Kate is springing for a $3.5 million Vera Wang gown and $1.8 million Prada shoes is totally unimportant and I totally don't care because I am cool like that!"

And now I just wrote an entire blog post about it! See, you fuckers turned me into one of you! And this is why I fucking hate people (cue the anarcho-hippies singing some stupid Peter, Paul and Mary song and trying to hug me while I beat them with their "Love Police" bullhorns).

Please just go read some tabloids and stop posting on Facebook about how much you "don't care".

P.S. Here's a wedding I care about: 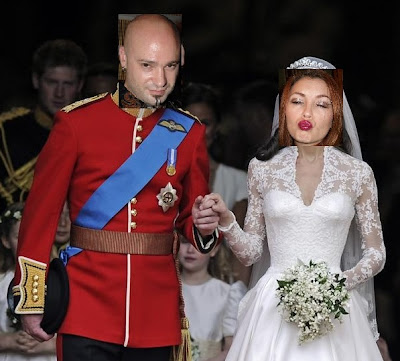 Posted by Trbobitch at 6:26 PM