Not the End of the World, Just the Rapture

So did you guys hear that the rapture took place today? I know what you're thinking... "Everyone's still here, this is bullshit". My friends, this is NOT bullshit, Jesus really did come to Earth today and take those who are "worthy" according to the bible. No really, I'm super serial.

Let's start at the beginning: Some holy man, whose "organization" has received about $80 million in donations since 2005, has used his divine critical thinking skills to kindly inform us of when the bible tells us the world will end. By some very creative interpretation, we get that the the flood that took place back in 4990 BC (and I can in no way verify that the Good Fairytale Book actually gives this date) will actually take place again in 7000 years because the man upstairs was actually relaying a message to the future people, knowing that his book would survive many thousands of years perfectly intact and accurately interpreted and translated (since he decided at one point all people couldn't speak the same language because then they would become more powerful than him). So when he said the rain would begin in 7 days, what he actually meant was 7 thousand years. That god, he's such an enigma, wrapped in a mystery, deep fried in riddles!

So anyway, when you do the math (look at the link I don't have time for such brain work!), it turns out that today is the day. Yeah, Jesus came today, and since you're reading this, I'm sorry you missed him! Don't feel bad, I was hoping he'd come save me from having to cut my 3ft high grass *sadface*. So I did some of that praying, and I asked Mr. Omnipotent Being why everyone was still here. He told me that the following excludes people from being included in the rapture:

1. Those who don't love thy neighbor, banging his wife does not count as love even if you DID mow their lawn.

2. Those who don't honor thy mother and father. Which nursing home did you send them to again? Oh, and remember that time in high school? That thing you said to them? Yep, you.

3. Those who have had sex during "that time of the month". You know you're guilty. In fact, if you've even sat on something that she just sat on, you're guilty.

4. Sodomy. Yep, you again... Thought that would be a clever way of getting around the blood thing? Guilty! Doesn't matter if you used a condom.

6. Ever cut your grass, exercise, clean or go to work on Sunday? GUILTY!

7. Ever tell you mom the cat broke her favorite Betty Boop knick knack? Or maybe that your belly hurt when it really didn't and you just wanted to get out of going to school? LIAR! No rapture rescue for you!

8. Ever tell your hubby the steamy gossip about the lady next door cheating on her dying husband? Not only is Jesus not coming to save her, he's not gonna come get you either! BAM!

10. Not going to church on Sundays? Oh you do? GOOD! Are you giving God his 10%?? Are you? God's not the IRS there are no exemptions! He doesn't care if you needed your oil changed and your kids live off ramen noodles... CHEATER!

He told me a bunch of other stuff, but I asked him to stop because it was all making sense now. I asked him if Jesus took anyone. God told me that 3 people made the cut: one was in a coma since birth and the other two were solitary, celibate monks who lived off of nothing but spring water and took vows of silence.

It's ok though, we only have to put up with hell on Earth until October. I imagine that means it's not going to stop raining (flood maybe), it will be 95 degrees in Pittsburgh every single day and my air conditioner will die. He's also planning to blast Justin Bieber and Katy Perry music from the trumpets of heaven for all to hear. Oh, and spandex will make a come back. 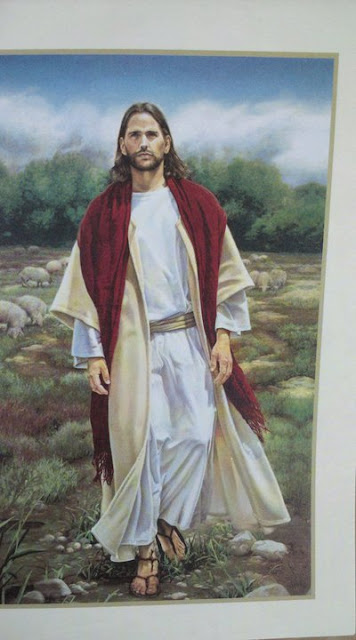 Pimp Daddy Jesus... He's coming to give you some gospel. That is not a crucifix in his robe, he's just happy to see you.
Posted by Trbobitch at 9:12 PM