So, as many of you know, I had a brief stint as a Crazy Cat Lady. I figured, I was divorced at the ripe old age of 25 and I would never get laid again, So I would take in every cat I could. GREAT FUCKING IDEA!

A (not so) Brief History

Before I moved into my house, I had a cat that was bought for me as a Valentine's Day present. It was actually a very sweet gesture by my now ex-husband (he was good for the Hallmark gestures, bad at being faithful and doing dishes, but I digress). I grew up with a Siamese cat named Whiskers (yeah yeah, I know) and she ran away after 13 years, so my ex bought me a "replacement". I promptly named her Guinevere, forgetting that this name was reserved for my first born daughter... Before you make fun of me, remember that this woman caused a war that made Arthur a legendary King by cheating on him with Lancelot (who was a total tool!) and leaving the land without a king, which caused the quest for the holy grail and BAM! an entire culture centralized around the actions of one woman. If that isn't badass, I don't know what is. (We'll go ahead and forget the fact that she spent most of the better years of her life - hello sexual peak! - in a nunnery begging penance for her sins). So anyway, Ms. Guinevere is now 7 years old and I still love her dearly.

Then came Maksim. The summer before my divorce, my offspring and I were out shopping. In the parking lot of the local Petsmart, Animal Friends had a little soiree going on, so we decided to attend for the free drinks and fuzzy bundles of animal cuteness. I wasn't in the market for a cat and I didn't think the husband would exactly approve, but I didn't give a flying fuck because I paid the bills. There was a litter of kittens, just left their momma, and being the animal lover that I am (and you fuckers thought I was a heartless bitch, hah!), I fell in love with a little grey kitteh. I decided to adopt him, paid the $65 and took him home. Home to a temperamental Siamese bitchface and a predatory Husky who was bred to kill and eat small animals (and, at one point, chased down, killed and dragged home a fawn, true story). I named him Maksim after my favorite pro dancer on Dancing with the Stars (and told my husband I was just keeping with the "Russian theme" in the family). We made Maksy a cardboard box with a little hole in it to hide in. This worked out well, until I found Nikita dragging him around by the neck. I decided she would be spending more time in the great outdoors until Maks got bigger.

Guin was always able to hold her own against Nikita, even given her small stature, after all, she didn't divide an entire Kingdom and cause the need for an epic quest because she was a weak-ass wuss. I remember one time, we brought Nikita home from being spayed (or spaded, as my mom would say... Sounds kinky). She had also had her dewclaws removed and was quite miserable. She had an E-collar (the cone thing around their neck) and plastic bags on her hind legs so the incisions wouldn't get wet. She refused to lift her head up and walked like a chicken (literally, not figuratively) because of the bags. So basically, I walked her to the car with the entire cone dragging on the ground and her lifting her hind legs dramatically in a staccato motion. When I got her home, my compassion got the better of me and I removed the E-collar. She was completely out of it (remember getting gassed to get your wisdom teeth removed??) and sat, staring, by the dining room table. Well, Guin, not one to miss the opportunity to capitalize on the misfortune of her arch-nemesis  (any doubt she is my cat?), jumped up on the table and decided to see how much fun she could have. She started sniffed Nikita, then start batting at her ear with her paw. She seemed to be thoroughly enjoying this revenge, and all Nikita could do was sit there and occasionally look back, no doubt saying to herself, "I hate you, you small furry thing with a pleasant smelling ass. When I stop seeing things in triplicate, I will exact my revenge by eating you until there is no evidence left and telling the humans you ran away."

So Maks got bigger, much bigger, and Nikita evidently forgot her sedative induced plot for revenge on Guinevere. Guin remained the enemy of both Nikita and Maks, being the emo loner she is. Maks, however, realized that if he didn't act afraid of Nikita, she wouldn't bother him. Either that, or he is slightly retarded and thinks she's a giant teddy bear because he rubs against her and tried to sleep next to her. Or, maybe he has so much fur that she decided it would be too much trouble to eat him.

Then came Squeege. I didn't name this cat. I have a Faerie friend (another story for another time) whose cat had kittens and, of course, I had to take one. So into my life and home came Squeege. The cute little grey Kitteh.

This was followed, not long after, by my adoption of my brother's cat. They hated this cat and wanted to get rid of it. (Keep in mind, by this point, I am a divorced mother of two with a full time job). I had met it once or twice and he was an absolutely beautiful and lovable, long haired ginger cat.

The funniest thing with both of these cats was their gender confusion. The orange cat was known to be a girl. They called her Honey. When I got her, I decided to name her Ginny (Harry Potter FTW!). Then, one day, she/he/it is rubbing against me and I get a good close up of the nether regions. The was no mistaking the two furry orange things I saw. Ginny was definitely a boy. By this time, this cat had started driving us all nuts. It had eaten through every single loaf of bread/bag of buns I bought. In addition to being a total attention whore. We finally settled on calling him Lucifer.

So now that we had all that cleared up... Remember how I reminded you that I was divorced mother of 2 with a full time job? Well, now I also had 4 cats and a very rambunctious dog. By this point, I had also taken to sleeping on the couch. A regular sized sofa with my 3 year old beside me and my 45 lbs. Husky curled up behind my bent knees... And Squeege... Sticking his ass in my face and demanding my attention while I was trying to sleep, cramped in the fetal position with Southpark playing on the TV (the TV I had to replace because Dickfur decided to steal the one I had while I was at working, making money to, presumably, pay the Spousal Support that he sued me for...). Meanwhile, the stench of Stupid Orange Cat would be wafting from somewhere...

Yeah, that's right... Both parts. "Lucifer" had decided to stop cleaning himself and we took to calling him Stupid Orange Cat, because none of us really liked him. Probably because he smelled like week-old Spaghetti-Ohs (which probably don't smell much different than "fresh" Spaghetti-Ohs). He also had this thing where he would bite blankets. You know how cats "knead" to get comfortable? Well, Stupid Orange Cat had this thing where he would bite whatever blanket was on the couch while he kneaded enthusiastically to get comfy. He was very, very lovable, but try as we might, we just couldn't get past the smell or the greasy residue in his fur. Even Squeege, who was one of the only reason we tolerated Stupid Orange Cat - because Squeege LOVED him, stop hanging around him. Maks, the infamous cleaner of the younger cats, stopped trying to clean him. Basically, the entire family completely shunned him. Only the dog would go near him, presumably to try to eat him because he smelled like the kind of thing the dog would eat (i.e. garbage).

It got to be too much for me, between stinky Stupid Orange Cat being, well, stinky and stupid, Squeege waking me up and peeing on my carpet, changing 3 litter boxes, buying cat food in bulk, Stupid Orange Cat spreading his diseases that he contracted from being filthy and vet bills, I had to get rid of some pussy.

I was able to pawn Squeege off on a friend and I kept throwing Stupid Orange Cat outside, hoping he'd run away. If I didn't see him for 2 days, I'd start celebrating, only to hear his obnoxious tomcat meow outside the door moments later. I'd finally let him in out of sheer compassion. I tried to like him, I really did, but the smell and the simple fact that he took no pride in being a feline completely turned me off.

When I moved in with my mom, I took Maks and Guin, as I had every intention of keeping them and I knew Squeege was in a good home. I had called the Humane Society to make arrangements for Stupid Orange cat, and they were full. I also tried Animal Friends, they required and application and I know Stupid Orange Cat would never be accepted to what is, essentially, kitty Harvard. I finally found a shelter an hour a way that I had planned to take him to. Stupid Orange Cat wasn't around on the day I moved out of my house, so, I hate to say, I kind of left him there. At first, I went back every couple of days to check for him and leave him food. I saw him a couple of times and didn't have the carrier with me to take him back (or so I made the excuse). Eventually, I was only going back every week or so, always leaving food and water outside. The one time I actually took the carrier, Orange Cat was gone. I haven't seen him since. There is a part of me that feel like a horrible, cat-abandoning asshole. There is another part of me that says no one in their right fucking mind would have wanted that cat anyway.

There is a moral to this story. It's not anything against cats, either. Cats are great. I love the two I have and they give me absolutely no trouble. The moral of this story is that I had better find a MAN to settle down with, because I don't like the smell of cat piss and am not cut out to be a crazy cat lady. 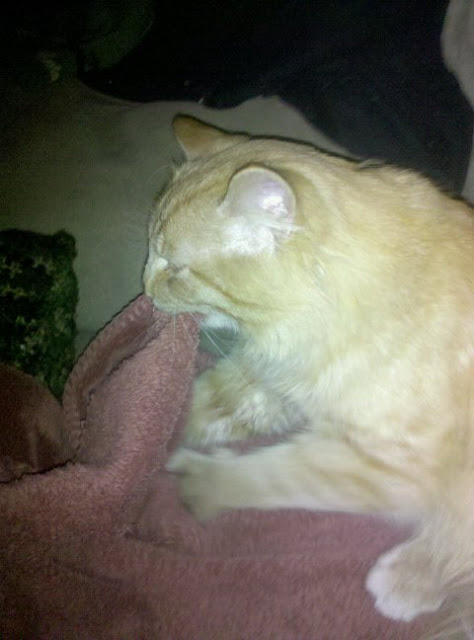