Once, America was a beautiful nation. Not because of the idea of American exceptionalism or the arrogance that  comes with such an idea. Oh, she was exceptional, but not because of her power. She was exceptional because she was the only nation built on the idea that all men are free. America once believed that other nations are also sovereign and that it wasn't in her power or right to be involved in entangling alliances, nation-building campaigns or out-right crusades against any other nation, peoples or ideas.

There was once a time when people minded their own business, but helped each other when needed, welfare was in the form of charity and you respected other people's property (partially because there was once a sense that stealing was wrong and partially because your neighbor would blow you to Kingdom Come without batting an eyelash - or getting sentenced to hard time - if you tried to take his shit). Now we have a government that gets 100% of its funding by theft, throws you in jail for protecting your family and property and tells you what you can and cannot eat and how your children should be educated. They then take your stolen money and distribute it around the world in the form of foreign aid and nation building campaigns, all to "keep you safe".

What do Americans have to say about this?

"We have to get the terrorists before they get us!" quotes a housewife from Illinois, while she browses the latest issue of Cosmo. "My government is keeping me safe."

"I am making fortune on my Blackwater stocks!" says a businessman from New York, while he climbs into his BMW.

America, it's awesome, oh yes. We're straight up asskickers and everyone hates our wealth and freedom. I mean, shit, have you walked into a Walmart lately? Have you seen the ultra-cool people and the super cheap Chinese goods? 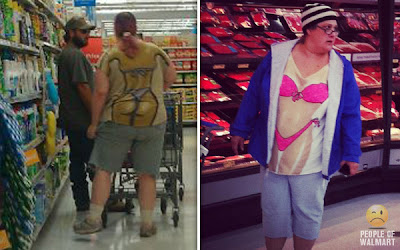 If I were a radical Muslim terrorist, I would be shaking in my boots after I was finished being totally jealous of this display of sheer AWESOME. 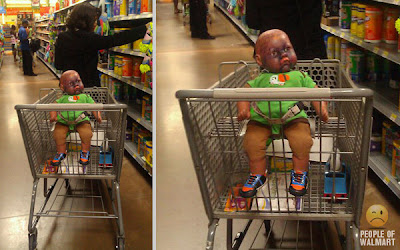 I can definitely say I would NOT fuck with this lady. Especially if my skintone was darker than the paint on the White House. Just sayin. 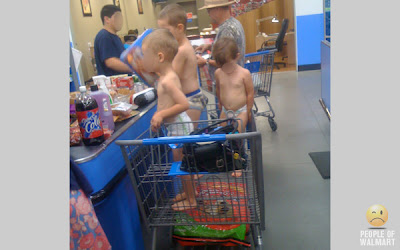 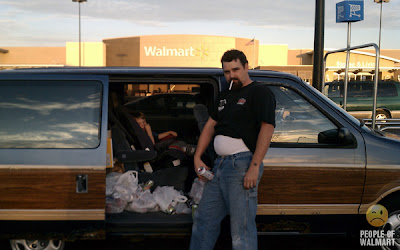 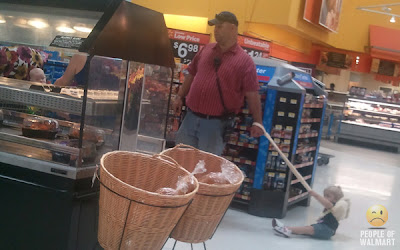 We raise our kids here in America with not only love and nurturing, but with judicial discipline and ninja training. Now shut the fuck up and get Mommy another beer before I slap those tears out of your god forsaken eyeballs!! Incidentally, if you'd like to purchase the child leash 3-in-1 Harness Backpack, Walmart does carry them. They're even made by Jeep, can that get any cooler? I mean, Jeep is probably made in Somalia or something, but who really cares? We're America, we don't need to make fluffy kid leashes when we have this: 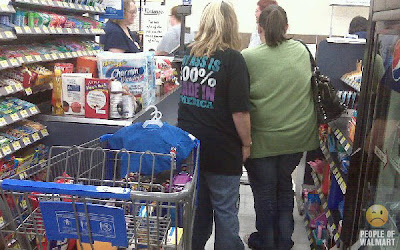 That's right. Do you think they make asses like that in China? I don't think so. In fact, given the One Child Policy, I will bet that female ass (of any shape/size) is a hot commodity in China. Anyone seeing a business opportunity here?
(All photos courtesy of http://peopleofwalmart.com)

Ok, so that was funny, right? Really? Are you sure?

I find it quite sad, because many of these people really do represent the vast majority of "American Culture". the Japanese have samurais and ninjas, Italy has pasta and gondolas, France has wine and french toast... What does America have? Trailer trash, rednecks, 5th generation welfare recipients driving Cadillacs and lots and lots of bombs.

Why aren't you all very, very scared right now?
Posted by Trbobitch at 5:08 PM