I rarely write about serious topics here. Well, maybe I do, in either cryptic ways or via hyperbole and humor. This time, I want my word vomit to venture into the serious, because I have nothing humorous to say about this topic. I may throw out a few snide remarks, but they are to be taken with a grain of rage and indignation, not in jest. Even if, at some point, you may be led to believe I am making light (and we'll see how this goes as it goes), please do not mistake me.


Blah blah... You know what? Fuck all that. I have been reading a bunch of garbage over the past few days and I have to say something. Even if it's just word vomit. Even if it's not some well-thought-out-backed-up-by-sources piece of literary genius. I'm just going to say it, without qualification. Without having to say," no, I'm not an atheist/agnostic/pagan-Illuminati-goat-worshipper/whatever stupid fucking label you're inclined to throw on me because you can't think outside of your stupid fucking boxes that you have to throw people in. I swear, I drink, I drive too fast, if that all lowers your opinion of me as a human being, look in the fucking mirror (the F-bomb will apparently be thrown about liberally tonight, how fitting).

Something put me down this rabbit hole. Once I got there, it was like the train wreck... no, I have to stop there, that metaphor is inadequate. It's like the psychotic mass murder, dismembered body parts and all, that you have stumbled upon and cannot look away from. I'm not kidding, that truly is how strongly I feel. I am shaken and appalled to my very core over this. There are a LOT of fucked up things going on in the world, but not a one of them has gotten me this riled up in a long time.

Ok, enough preamble, you get it... maybe. Spend some time here: https://biblicalgenderroles.com. I particularly encourage you to search for the word "sex". Spend some time reading the comments. I dare you. Go ahead. I'll wait. I suspect 99% of you will find my F-bombs to be a breath of fresh mountain air after you read that site...
...
...
...
Had enough already have you? Or maybe you agreed with it? If you did, don't bother commenting. I will lose all respect for you as a human being. I'm not kidding. Here are some of the choicer comments/posts: 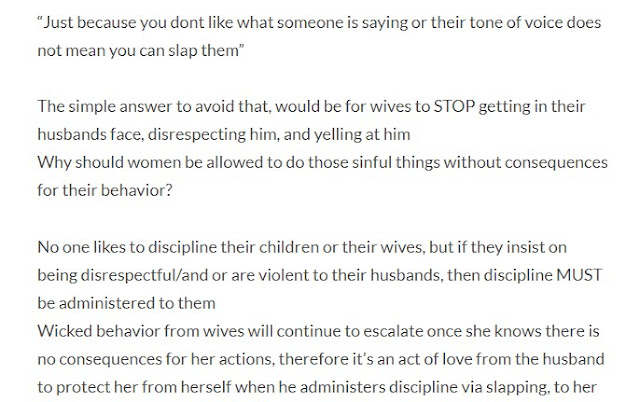 If you slap me, fucker, I am going to shoot you in the face. How do you like that? Because, in America at least, I can own a gun, and I can defend myself from someone threatening bodily harm to my person, even if he's my "husband". I'm not a child. I'm an adult. I am your equal, not your ward. What kind of self-respecting woman marries a man who believes this garbage? I mean, is this like hillbilly backwoods shit come to the internet or are these like normal, middle class people who believe this? That fact that anyone thinks they can treat another adult like this is fucking disgusting to me. Especially when you look at all the places where it's stated that men are physically strong than women, "the weaker vessels", therefore, thou shalt slap the bitch?

Let's take a look at a passage from the actual post:

I feel like now is a good time to point out the title of this article/blog post/word garbage:


Why the Bible Allows Forced Sex in Marriage

That is directly from the site, font and all. No emphasis added. Is this purposefully inflammatory? Like seriously, I feel like maybe this is just some person maybe trying to be funny in a sick, demented way. No, friends, it's not. This is a real person, who really believes this crap.This person goes on to tell women they should show skin, even in public, to please their husbands... But I will get to that one soon. Let me first comment on the above passage (as if I need to). I don't give two crispy flying fucks what some stupid book says (a book written by human beings, not by a divine being), you do not have the right to force yourself upon ANYONE sexually. No, I wasn't sexually abused or molested, I have no demons. For most of my life, I have enjoyed a healthy, active sex life. I am not somehow jaded by bad experiences. I just simply do not and cannot believe that a husband somehow has sexual dominion over his wife's body, that she is never "allowed" to say no. This is a great way to make someone leave you, by the way, forcing them to have sex with you because "god said so", unless of course you happened to find some poor, repressed woman who actually thinks this is truth.

I've spent so long speaking out against feminism, because I do believe that the ultimate goal of it does NO favors for women (or children for that matter), that I have probably overlooked a lot of what drives some women toward it. Was this the attitude of society a couple of hundred years ago? If you read history books, it pretty much was. Women were property, bargaining chips and generally inferior to men. I can't accept that.

Looks guys, I have no aspirations of becoming an ironman or fathering children. I don't want your construction jobs. I don't want to pay child support while you care for my children and I do whatever I want. I don't want to pee standing up (well maybe a little) or be so weak in the face of an attractive member of the opposite sex that I have to coerce my wife to do things she may not want to do so that I won't be "tempted". I don't want to be that weak. And for the record, I don't think most of you do, or are, either. 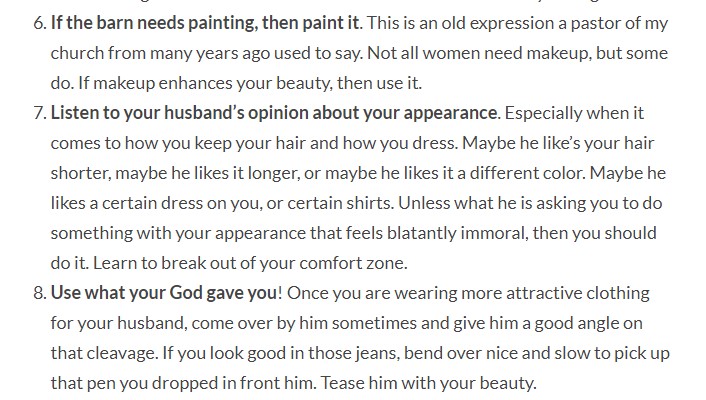 Thou shalt wear makeup if thou art ugly. Thou shalt behave like a slut so your husband doesn't go find an actual slut.

No seriously. Go search this site for sex. I'm actually less mad now, because once I saw all the posts, I realized that this is just some sick, depraved perv who uses the Bible to control women. Ok, maybe I'm not less mad, but it gives me hope that not all Christians believe this drivel. That not all of these men who claim to be holy and good and Godly think they get to lord it over their wives because women are somehow lesser beings. We don't tolerate that crap in our society any more. Not against black people or Asians or women, for the most part. Sure, there are still some assholes out there, but humans are humans an All Men are Created Equal - men, meaning human beings, even if the dudes who wrote that at the time weren't totally enlightened.

So I don't want to post any more from there. If you want to witness the carnage and feel like you have been brain raped, be my guest. here are some of the choicer articles you might sample:

Now that I am sort of over my righteous anger (because, for real, do people actually, for real believe this shit and get to force it on other people?!?!), I have to say I could bash this site all day. However, I think the takeaway here is that I can almost relate now to why women turn to feminism (not that I think that's the answer). But man, I have to say, if I was with a man who believed this, well, I wouldn't be with him, of course, but I might be so completely taken aback that I might not know how to react.

Also, this is why people don't like your religion. Don't blame non-believers, blame the people who count themselves amongst your ranks that make you look BAD.

I also want to point out that, while this was probably on of the worst, this was in no way the only site that promotes these types of beliefs. Particularly that God views women as lesser beings than men or that women were put here for the use and abuse of men, solely.

I leave you with:

Let a woman learn quietly with all submissiveness. I do not permit a woman to teach or to exercise authority over a man; rather, she is to remain quiet. For Adam was formed first, then Eve; and Adam was not deceived, but the woman was deceived and became a transgressor. Yet she will be saved through childbearing—if they continue in faith and love and holiness, with self-control.

The women should keep silent in the churches. For they are not permitted to speak, but should be in submission, as the Law also says. If there is anything they desire to learn, let them ask their husbands at home. For it is shameful for a woman to speak in church.

To the woman he said, “I will surely multiply your pain in childbearing; in pain you shall bring forth children. Your desire shall be for your husband, and he shall rule over you.”

Nevertheless, in the Lord woman is not independent of man nor man of woman; for as woman was made from man, so man is now born of woman. And all things are from God.

I'm just the lady sitting here pasting shit. Don't ask me to figure it out. Maybe I am taking it out of context. Or maybe it's just man in all his contradiction writing shit down, claiming it's more than it is and using it to control people.
Posted by Trbobitch at 10:09 PM No comments: